Tracking red squirrels in the Highlands

With temperatures as low as -15°C, steep hills, bogs, fallen trees and midges, radio-tracking squirrels in the Highlands has its challenges - but it also has plenty of rewards.

A study is being carried to investigate the effect of forestry operations on red squirrels. Asking what do squirrels do when you cut down their trees? Where do they go? Do they all survive? To answer these questions, squirrels are fitted with collars that contain small VHF transmitters, and then tracked before, during and after the forestry operations taking place.

The squirrels are caught in mink traps modified to provide a place for the squirrels to hide and shelter from the elements. Caught animals are transferred first to a bag, and then a handling ‘cone’ – which is a small cylindrical cage. This keeps the squirrel relatively still while being examined, weighed, a collar attached a hair sample taken for DNA analysis, and an ear tag attached for identification purposes.

After trapping, a VHF receiver with a yagi antenna is used to track the squirrels. The signal from the collars allows the direction and approximate distance of a squirrel to be determined, so the team can gradually close in on it. Ideally, the squirrel should be seen to record what it is doing, or the drey located if it is in one. Unfortunately, squirrels are experts at hiding! Even when the location has been narrowed down to a single tree, or even part of a tree, the squirrel can be very difficult to spot. When they spot humans they tend to freeze, but if the team stay very still and quiet they eventually forget and come out.

Tracking in a forest can be difficult, as the signal from the collars bounces around off the trees, so often it seems that the squirrel is in all directions or two opposite directions. Hills and dips also affect the signal. To overcome this, we check the signal from several different places before deciding on a direction. Occasionally it is a case of trial and error and we head off in what seems like the most likely direction only to find the signal disappears after a while.

Perhaps surprisingly, squirrels can wander quite far from where we trap them. In particular, the young ones go exploring and will eventually settle down in their own patch of forest. On occasion we need to use a large antenna affixed to the top of our car and drive around looking for a missing squirrel. They can end up several kilometres away, crossing open fields, roads and even streams, and they are able to travel such distances in just a few hours. 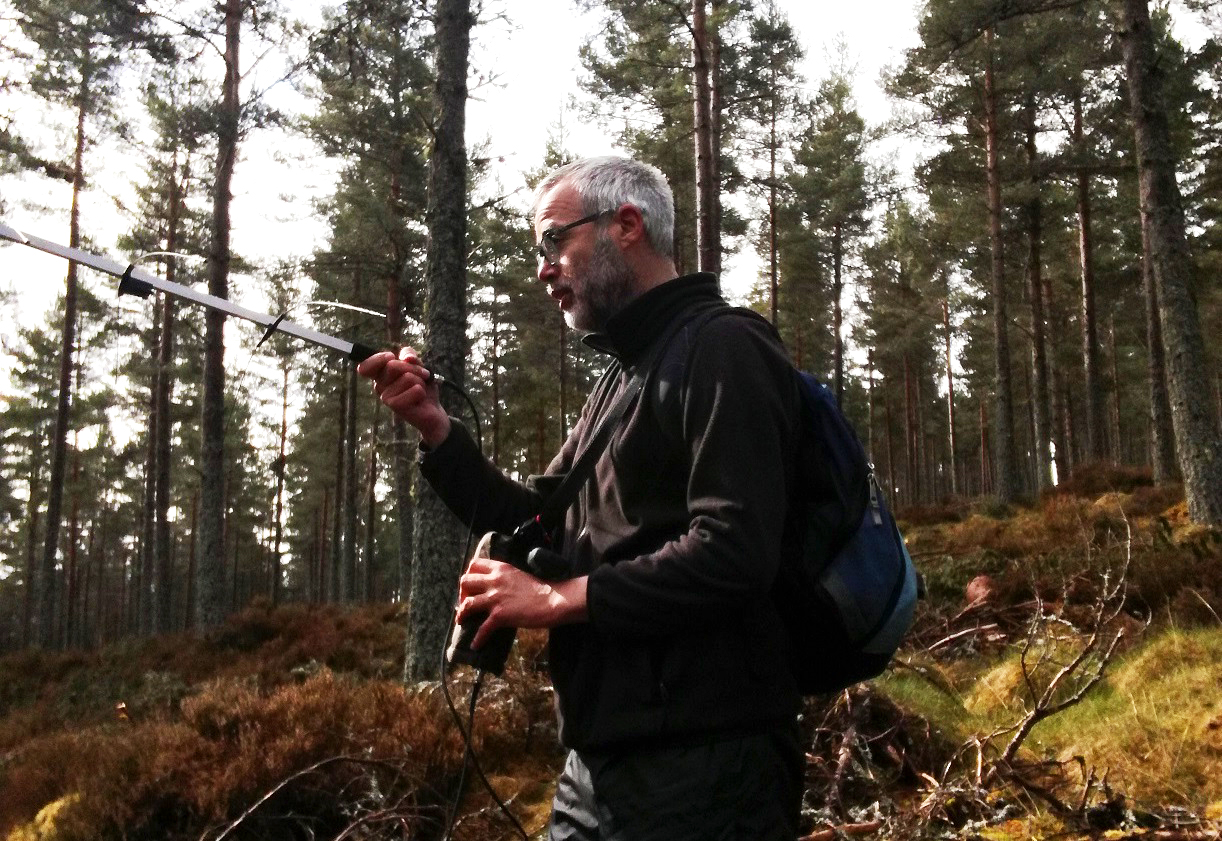 So what could be better than being paid to wander around a forest looking for squirrels? For a start, there are the midges. If you have visited or worked in the Highlands you likely understand. There are also mosquitoes, horseflies, wasps and several other species that bite or sting – including ticks that can be dangerous and must be checked for and removed every day.

The weather can be a challenge. One advantage of tracking in sub-zero temperatures is the lack of midges. Although this must be weighed against frozen and numb fingers and toes, and the occasional icicle hanging off your nose. Tracking on the side of a hill in deep snow is particularly interesting – one wrong step and you end up sliding to the bottom to face a tiring climb back to the top.

Following a signal can lead to all sorts of interesting situations – such as being knee-deep in mud, in a field of chest-high nettles or stuck in a gorse bush. Once tree felling takes place, the forest floor is covered in brash, which is very easy to trip over, and deep muddy ruts that make tracking through the forest much more difficult.

Fallen trees are another challenge. Deciding whether to go under, over or around is fine for just one or two, but often it can be a whole section of forest. The signal will often lead into a very dense sitka spruce plantation, which is dark with lots of scratchy branches and very difficult to walk through. Sometimes crawling on hands and knees is the best solution The squirrels have no such problems running through the treetops, but humans are far less agile and the signal can be lost in these situations. Do they know this and do it on purpose? 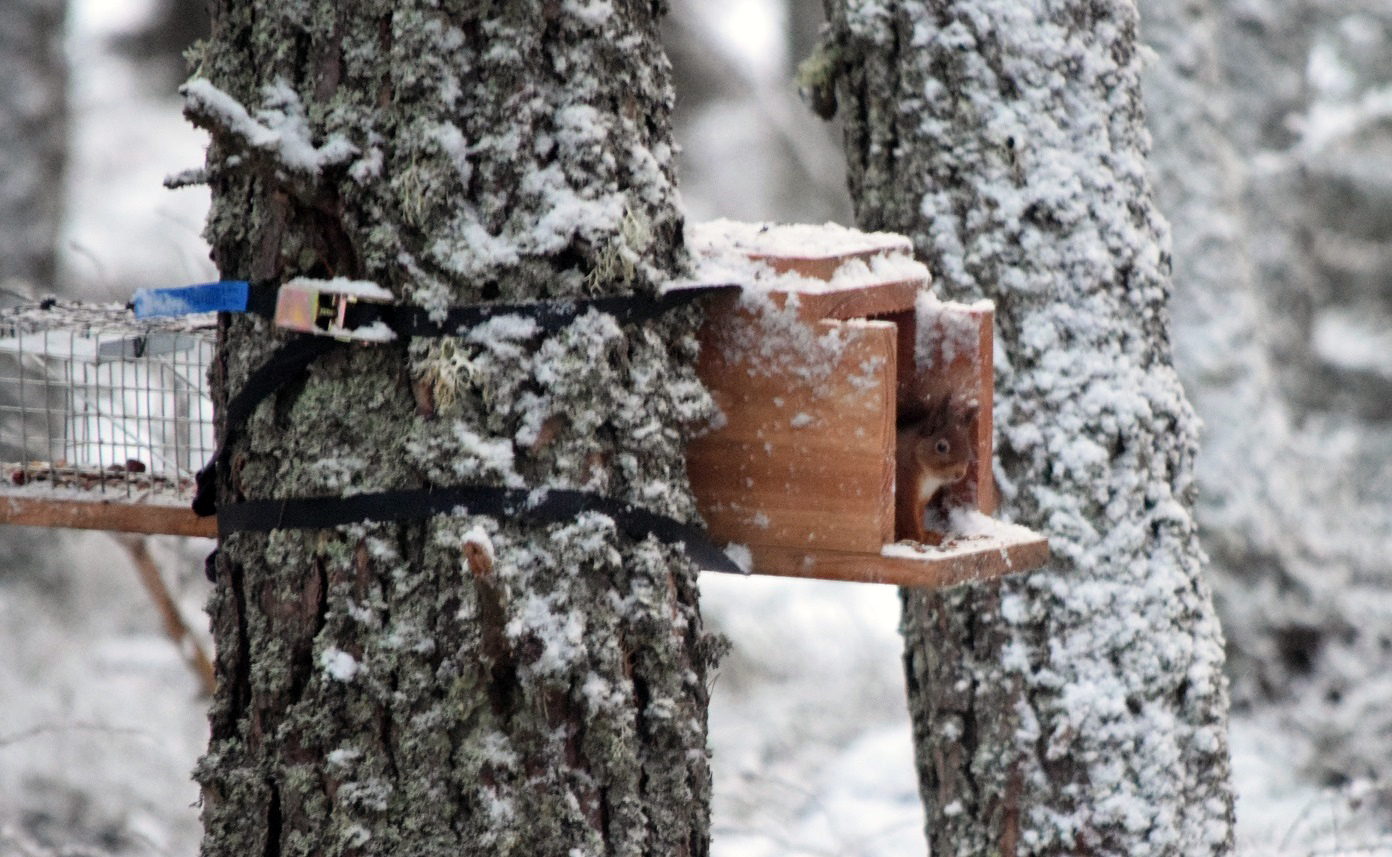 No matter what the challenge it just adds to the fun. Even on the worst day, when completely soaked, drained of blood by midges, there are no squirrels in sight, after falling several times and totally exhausted, this is still a wonderful job and far better than any office. It is such a beautiful part of the world with stunning views, and so much wildlife that many people never see.

There are regular encounters with deer and hares, and the birds are always entertaining – especially the crossbills dropping pine cones and crested tits flitting through the trees. Buzzards and red kites circle overhead – they do occasionally catch a squirrel but this is all part of the cycle of life. Best of all are the occasional glimpses of pine martins and the elusive capercaillie. There are also all the less obvious creatures, such as bugs, butterflies and moths, slugs, newts, dragonflies and damselflies, as well as plant and fungi.

This work contributes to ensuring that red squirrels have a bright future in our commercial forests. Seeing these charismatic animals running and jumping through the treetops is always a pleasure. Hopefully the outcome of the study will be that licence conditions for forestry operations will be much better suited to protecting red squirrels, so that many more people can enjoy the same thrill from seeing them.

Further details about the research and some of the initial findings can be found here.

Andy Cox is a Research Assistant studying red squirrels through Inverness College at the University of the Highlands and Islands in Scotland.