In September this year Saving Scotland’s Red Squirrels launched the very first Great Scottish Squirrel Survey, a campaign that encouraged people in Scotland to spend some time enjoying the outdoors while keeping a lookout for tufted ears and bushy tails.

In just one week over 600 people took part, submitting 828 verified red and grey squirrel sightings on our website, scottishsquirrels.org.uk. This was a fantastic result for the project – in a more typical week it receives around 180 sightings. 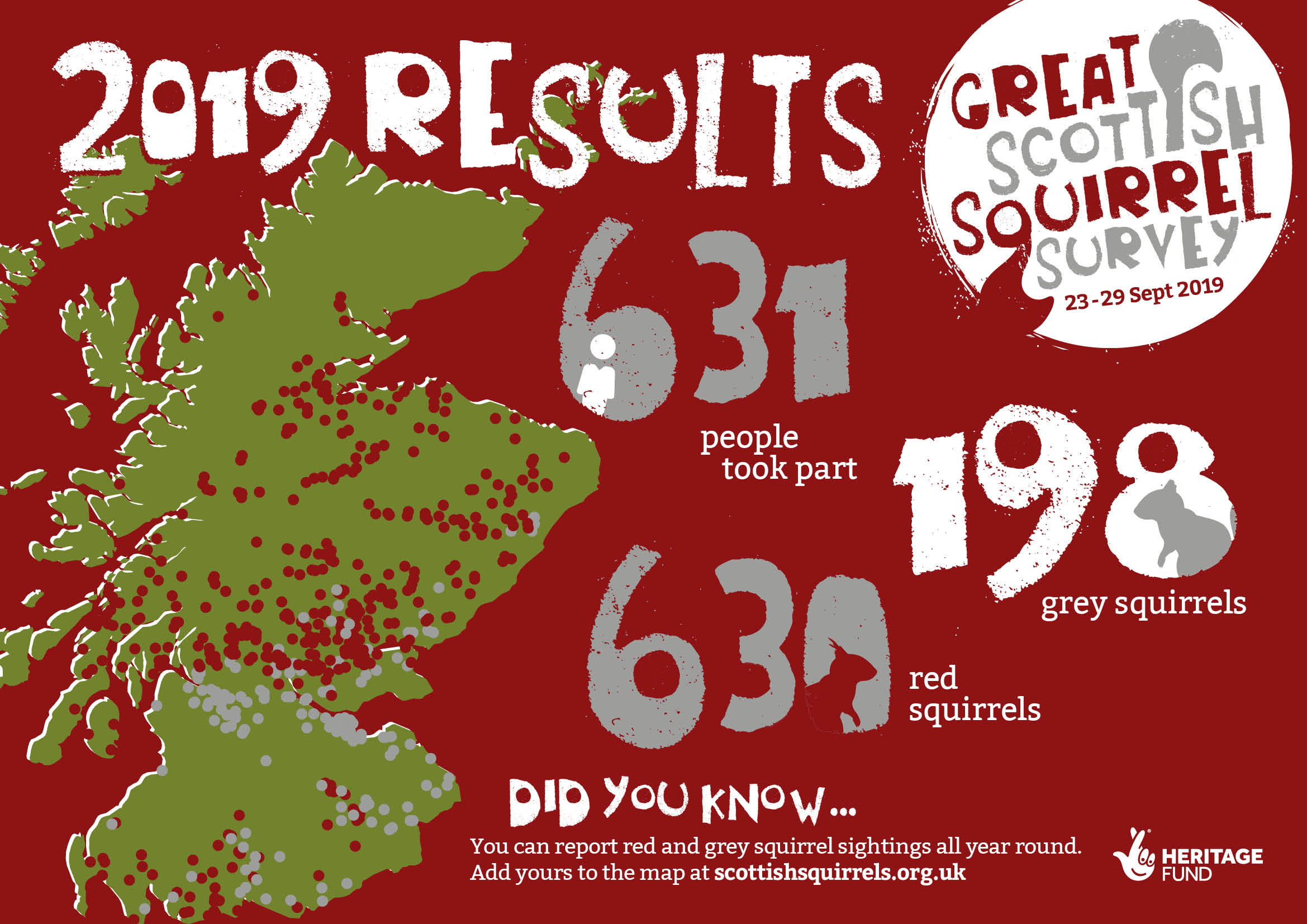 Saving Scotland’s Red Squirrels is a partnership project, led by the Scottish Wildlife Trust, with the aim of controlling the spread of grey squirrels in the parts of the country where red squirrels are most under threat. Landowner engagement and supporting local volunteer groups is crucial to achieving this aim, but population monitoring also plays an important role. It is essential to demonstrate the work is having the positive and desired impact, and know where conservation efforts should be focused going forward.

Our main method is the annual spring survey. Between March and April each year hundreds of volunteers collect feeder-box hair samples from across our project’s priority areas, which are analysed to detect the presence or absence of both red and grey squirrels in the area. Knowledge and understanding are further enhanced by sightings submitted by the public, a simple way for anyone in Scotland to do their bit for their native reds. Last year we received a record-breaking 8424 sightings, and thanks to the Great Scottish Squirrel Survey this figure has been surpassed still with a few weeks left before the end of the year.

Get involved in squirrel spotting

Sightings data is valuable because it covers the whole of the country, providing us with a fuller picture outwith our project areas. It can also help us take swifter action on the ground – if someone reports a grey squirrel in an unexpected area, our staff can contact the individual for more information, enabling them to manage the situation much more effectively.

The public can submit their red and grey squirrel sightings all year round, but this year we decided to try something a little different. By encouraging people to actively go outdoors and look out for squirrels, we were able to create a more detailed ‘snapshot’ of the situation, and in future years we’ll be able to compare results.

The 2019 results are fairly representative of red and grey squirrel distribution across Scotland. Red squirrels are still widespread across the north of Scotland, with a large number of sightings reported in the Central Lowlands to the north of Edinburgh and Glasgow. In the North East, the only grey squirrel sightings were concentrated in Aberdeen. Targeted control work has significantly reduced this population in recent years, and our efforts have been rewarded with increasingly frequent red squirrel sightings in city locations.

The majority of grey squirrel sightings came from the Central Belt, especially the two major cities, but were also scattered northwards across Tayside and much of the south of Scotland. However, we appear to be making good progress in our ambition to maintain Loch Lomond and the Trossachs National Park as a ‘red only’ zone, with work in the wider Stirling area also beginning to having a positive impact.

Sightings in the Scottish Borders echo recent findings from the spring survey that there are still healthy red squirrel populations in such areas such as Selkirk and Peebles, but grey squirrels are well established, particularly in the east of the region.

All the sightings data is verified by a Conservation Officer before being added to the Scottish Squirrel Database for other researchers to access. Of course, the other aim of the Great Scottish Squirrel Survey is to get more people engaged with the red squirrel conservation story - so off to a good start!

Gillian Hatcher is the Communications and Engagement Officer for Saving Scotland’s Red Squirrels.